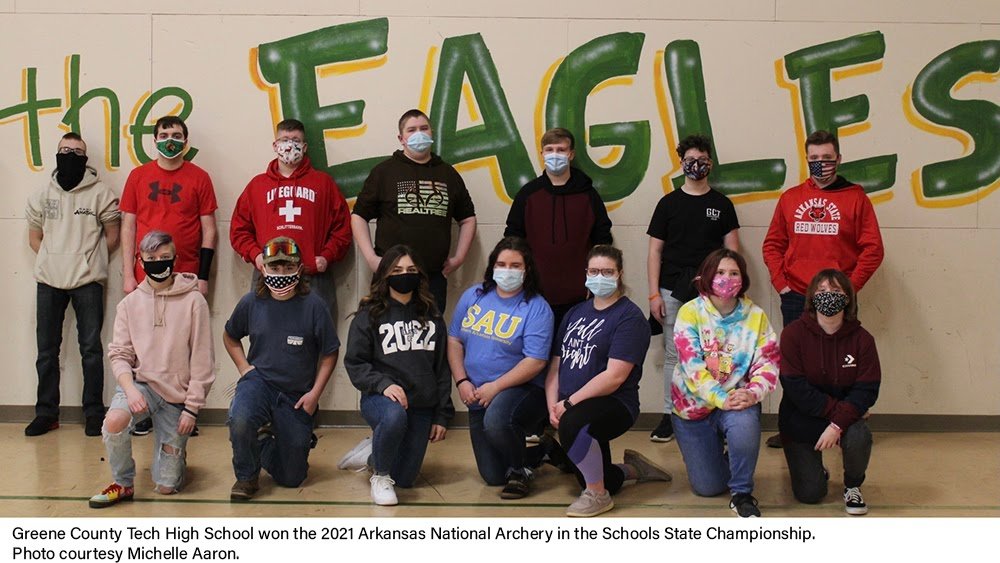 LITTLE ROCK – The excitement of a full arena in Hot Springs and hundreds of shooters lined up from one end of the hall to the other was missing, but the Arkansas National Archery in the School Program determined 2021 champions in senior high, middle school and elementary divisions this week thanks to technology.
Due to COVID-19 protocols and restrictions, the ANASP regionals in February and this week’s state tournament were conducted virtually at each qualifying school. State tournament shoots were held Monday through Thursday, with each school having two officials on hand, and scores compiled and submitted.
Only 60 points separated the top six teams in the high school division, but Greene County Tech finished on top with a total of 3,366. Waldron trailed in second place just 16 points behind the winner and five points ahead of third-place Alpena High School.
The drop was larger to fourth place, where Oden High had 3,311 points, nipping fifth-place El Dorado at 3,307 and Valley Springs in sixth at 3,306.
Greene County’s team put 194 arrows in the bull’s-eye to provide enough of a winning margin, 16 better than Alpena’s total of 178 “10s.”
Charleston’s accuracy was the best in the middle school division, with 145 bull’s-eyes helping Charleston Middle to a 3,253 score, 89 points better than runner-up Greene County Tech Middle. Alpena also took third in this division, recording 3,158 points. Charleston’s “Ten Count” of 145 was 32 bull’s-eyes better than any other team.
With perennial winner Hill Farm Elementary of Bryant not competing this year, the elementary division championship was wide open. Batesville’s Eagle Mountain Magnet School, a regular contender to Hill Farm in past years, took home the championship with a score of 2,963, 129 points better than runner-up Charleston. Old High Middle of Bentonville was third with 2,812, edging Hamburg at 2,810. Hamburg, though fourth, gave Eagle Mountain a run in the total bull’s-eyes, charting 63 to Eagle Mountain’s best of 65. Old High had 61 “Ten Counts.”
Thirty-two teams competed on the state championship level in the elementary division; the middle school division saw 35 teams turning in scores, while the senior division drew 34 teams, and two of those squads also entered other shooters individually.
“This years tournaments have proven to be a little more difficult due to COVID, inclement weather, and just the normal competition for time and space at schools across the state,” Curtis Gray, ANASP coordinator for the Arkansas Game and Fish Commission, “but we were able to successfully provide the students a way to showcase their archery skills and what they have learned from their schools participation in ANASP.
“We will be delivering the trophies to the schools in the upcoming days.”
Victoria Allison of Columbia Christian School and Justin Young from Greene County Tech were the top individual finishers (girls and boys separately) in the senior division and both won $2,500 scholarships. Young, a junior in high school, was four arrows shy of a perfect score, hitting 26 bull’s-eyes and scoring 296 points out of a possible 300. Allison was not far behind, as the sophomore hit 22 “10s” and scored 290 out of 300 points.
Scholarships totaling $2,500, $2,000, $1,500, $1,000 and $500 will be presented to the top five finishers in each of the girls and boys divisions as representatives from ANASP and the AGFC’s Education Division make their rounds through the state congratulating winning schools and archers.
Ties between finishers were decided by their total number of bull’s-eyes. Behind Allison, the other senior girls top finishers in order were: Brandi Hagan, sophomore, Alpena, 288 (20 bull’s-eyes); Abby Strother, ninth-grader, Oden, 288 (18 bull’s-eyes); Lexi Hall, junior, De Queen, 288; Annie Strother, ninth-grader, Oden, 287.
Chasing Young in the boys senior division were: Dylan Brown, junior, Waldron, 294; Ben Bufford, senior, Pangburn, 293; Devon Wolf, senior, Omaha, 291 (23 bull’s-eyes); Patrick Poor, junior, Waldron, 291 (22 bull’s-eyes).
Top five individual finishers in the middle school division (girls): Ava Martinez, Charleston, 283; Taylor Couthren, Charleston, 281; Hannah Hanson, Washington, 281; Ella Curry, Alpena, 279; Keeley Nikkel, Bergman, 276; (boys): Tate Meadows, Washington, 291; Brody Little, Barton, 289; Trent Mudgett, Valley Springs, 285; Javan McGowan, Greene County Tech, 283; Tanner Stark, Charleston, 282.
Top five individual finishers in the elementary division (girls): Gracelyn Sinclair, West Side Christian, 269; Lilianna Green, Arkansas Arts Academy, 261; Maleah Treat, Eagle Mountain Magnet, 260; Madelyn Whittle, Bentonville Old High Middle, 260; Sophie Krug, Eagle Mountain Magnet, 259; (boys): Hayes Kibe, Sulphur Rock Magnet, 280; Dalton Farris, Parkers Chapel, 270; Levi Ledbetter, Perryville, 269; Case Allison, Greene County Tech Intermediate, 263; Colton Cunningham, Hamburg, 263.
While missing the excitement usually found at Bank OZK Arena in Hot Springs on the first weekend in March, Gray said the virtual tournament worked.
“We only had 61 kids that registered and did not compete,” Gray said. “That is an even better follow-through rate then we have had in the past with in-person tournaments.”
Gray hopes next year’s ANASP will be back to normal with tournaments staged in loud, busy gyms during regionals and in front of a big arena crowd for the state finals, where thousands of attendees also bring donated cans of food for Arkansas Hunters Feeding the Hungry.
“This year the time it takes me to put up all of the equipment will be far shorter than normal,” he said. “That's going to give me more time to work on recruiting new schools for ANASP and getting them started in the program. If your school would like to get involved in ANASP reach out to me through the ANASP webpage at www.agfc.com.
“It is now time to start looking towards next year's tournaments and when we can hopefully invite everyone back into Hot Springs for the ANASP State Tournament in 2022.”
For a complete listing of team scores in all divisions, visit https://nasptournaments.org/TournamentDetail.aspx?tid=6609