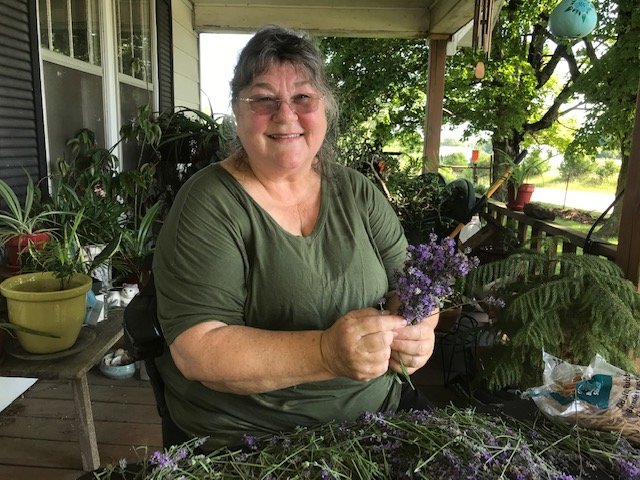 COMPTON — Karen Fancher waved to passing cars while she sat at a small table on her front porch wrapping rubber bands around stems of lavender she harvested from her gardens. She was also talking to a reporter about her business AuxArc Botanicals.
There wasn't a whole lot of traffic on state Highway 43 that sunny summer morning. The neighbor across the highway was baling hay.
Most of the traffic appeared to be local, but some vehicles you could tell were driven by tourists as they had kayaks or canoes tied on top of them likely bound for the Buffalo National River. Fancher's waving was also an invitation to stop, to visit, maybe buy some of the little lavender bouquets she had already made or they could go out into the rows of various subspecies and pick what they wanted.
Fancher said she grew up as a member of the Clark family in Newton County, on a ridge near the Lost Valley recreational area owned by the National Park Service today. Her current home is just a half mile from the Boone County line, just short of greater downtown Compton. She said the property belonged to her grandmother and mother before coming to her.
A medical nurse for 48 years, Fancher said she found an interest in alternative and herbal medications. Lavender has a long history of medicinal uses going back to ancient Egypt as an embalming agent.
It can be used in a lot of applications, she said. It can be used as an antiseptic or used as a calming aid. Its essential oil can be put directly on the skin. It can be used on children because it is natural and safe.
Fancher said there are about 47 subspecies of lavender and she has been growing five of them. This is the third year since the first plantings and now they have matured. The varieties she offers are Grosso, Hidcote, Munstead, Phenomenal (long stem) and Provence (named after the lavender center of France).
All varieties were brought to America. Fancher said she knew of no native subspecies. She is a member of the US Lavender Growers Association.
Lavender is a native Mediterranean plant. Subspecies have different shades of blue and purple and differ in aromas. Some have longer stems. Most varieties grown in the US come from the varieties cultivated in England because they tolerate the colder winter weather.
A perennial, an individual lavender plant may live 20 years depending on climate and precipitation. Fancher said she lost half of her first planting due to the harsh winter that brought with it too much rain. She plants on south facing slopes to promote drainage. She amended the soil with lime to boost the pH. Lavender does not like acidic soil or "wet feet". She uses weed blocking fabric to keep down weeds to make cultivating easy.
The key time to plant lavender is in September, but it can really be planted at any time, Fancher said. Her plants were in bloom in May and June. It is a great pollinator and her plants attract bees from her neighbors' hives.
Fancher makes bundles of lavender consisting of about 100 stems each. For best aromatic results the bundle should be allowed to dry hanging upside down for a week to 10 days.
Lavender has a savory taste so it has culinary uses, such as in baked goods. It can be made into a sugary syrup and added to lemonade to make for a more interesting and refreshing taste. Lavender flowers, leaves and stems can also be distilled to extract its oils.
"It's the best smelling job I ever had," she said.
Along with the lavender, Fancher grows a wide variety of herbs in raised beds around the property.
She said she began planting the lavender with her husband Scott Fancher, an attorney and USDA agent. He passed away due to cancer in August 2019 at the age of 64.
She said she is carrying on in his memory and has begun to use the farm as an educational and recreational venue. The barn was recently used for the Kingston High School class of 1971 50th reunion as well as starting to host weddings.
In the near future, there will also be some scheduled classes, seminars, weddings and other events.
You can keep up with what's going on by going to https://auxarcbotanicals.com . You can also contact Karen via email at info@auxarcbotanicals.com or by phone at 479-387-1697
Typical business hours are Monday-Friday, 8 a.m. - 5 p.m. or you can make an appointment for a Saturday or Sunday visit. 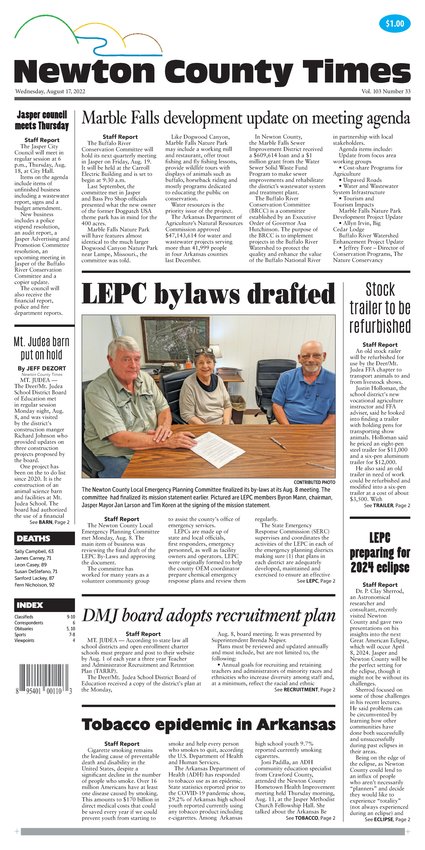