The case files on three men suspected in the Feb. 8, 2018, stabbing death of Christopher Alvard and his dog near Eureka Springs were unsealed Wednesday and show details of the 3-year-old killing.
Joshua Loyd Anderson, Charles Ky Hanna and Jason Hartley Helm are all charged with first-degree murder and cruelty to animals in the case that was under investigation for almost three years before they were arrested Feb. 8, the anniversary of the discovery of Alvard’s body.
Prosecuting Attorney Robert T. Rogers recused from the case because he had represented “the principal suspect” in the case in several criminal matters in the past, records show.
Little Rock lawyer John “Jack” McQuary was appointed as special prosecutor. The case files were sealed on Jan. 28.
Online court records show that Helm was a suspect in Alvard’s murder at least as of Feb. 26, 2018, when Circuit Judge Scott Jackson signed an order to require Helm submit a DNA sample to be tested against evidence collected at the scene.
Arkansas State Police Special Agent Dale Bailey filed an affidavit requesting the DNA sample from Helm on Feb. 23, 2018.
According to the affidavit, Alvard’s family members were unable to make contact with him at his residence on County Road 116 near Eureka Springs. Alvard’s mother went to the residence, finding the door had been kicked in and there was a large amount of blood on the porch.
Carroll County Sheriff’s Office was notified and responded to the scene, where they discovered the body of Alvard and his dog. An autopsy revealed Alvard had been hit in the head at least twice and had multiple stab wounds. The dog also showed multiple stab wounds, the affidavit said. State Police were asked to help with the investigation.
“During the course of this murder investigation, Jason Helm has emerged as the main suspect,” Bailey wrote in 2018.
Information from sources and interviews indicated Helm had been communicating with people during the timeframe of the murder and was trying to get a ride from the area of Helm’s residence.
“Information received stated that Helm has made the statement to an unknown person that Helm had gotten into an altercation with a guy and his dog and that it went bad and that he thought he left his DNA at the crime scene,” the affidavit said.
Helm was arrested Feb. 16, 2018, on a warrant for parole violation. While held in the Carroll County Jail, Helm allegedly made a phone call, which was recorded, in which he said he thought police had been following him through Facebook because he was using the social media platform through WiFi.
Hanna told investigators that he picked up Helm behind the Eureka Springs School during the time of the killing, the affidavit said. He said Helm didn’t seem like himself and was very talkative. He said he took Helm to Anderson’s residence. Other witnesses said Helm and Anderson were very close.
Anderson’s wife, Mary, told investigators that Hanna had been at her residence and had what appeared to be a serious dog bite he later claimed to be a gunshot wound.
Mary Anderson told investigators that she and her husband had borrowed Hanna’s vehicle and there was a plastic bag containing bloody paper towels, toilet paper and a piece of a shirt, the affidavit said.
“She stated Josh made Ky take it out in case Ky had Staph Infection, because Mary had cancer,” the affidavit said. “She agreed to try and find the bloody items, which were in a plastic bag, but she later stated she couldn’t find it and that her child told her Ky had burned a plastic bag.”
That affidavit was sealed in February 2018 as the investigation ensued.
An arrest affidavit filed Jan. 28 of this year said the names of all three suspects kept coming up during the course of the investigation. Attempts were made to interview all three suspects and “one of the three” told investigators that all three were involved in Alvard’s death. He said they initially went to Alvard’s residence to “rough up” Alvard.
“He said Alvard fought back to the point where at least two of the potential defendants used deadly force armed with knives,” the affidavit said.
Records show Anderson and Helm were being held in the Carroll County Jail, while Hanna was being held for Carroll County in the Boone County Jail. All three have pleaded not guilty and are awaiting further court proceedings.
Helm also faces a single charge of terroristic threatening for allegedly threatening to shoot a woman at a residence at Holiday Island on Dec. 20, 2020.
When asked about the length of the investigation, Bill Sadler, Arkansas State Police public information officer, said the investigative timeline and processes that lead to any arrest are not subjects of discussion pending adjudication.
But Sadler also said investigators never set the case aside and continued gathering evidence and facts essential for a prosecuting attorney to have before filing a criminal charge.

Summer bike hikes a relic of the past

Do Gallup Poll respondents have a prayer? 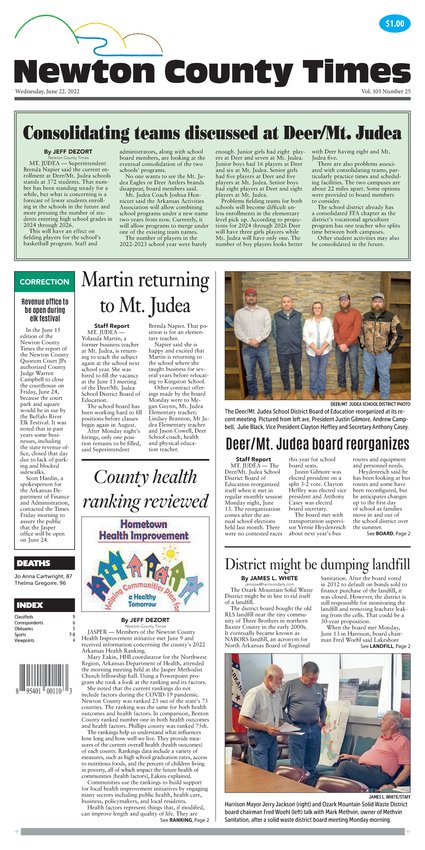